Strong autumn for rail traffic at the Port of Gothenburg

During 2018, 398,000 TEUs were transported to or from the port by rail. The figures were strongest during the final quarter of the year when rail-borne container freight increased by 27 per cent. “The fact that long-distance freight transport is recovering at a higher rate is a clear indication of the growing confidence in the Container Terminal throughout the country,” said Claes Sundmark, Vice President, Container, Ro-Ro and Rail at Gothenburg Port Authority. 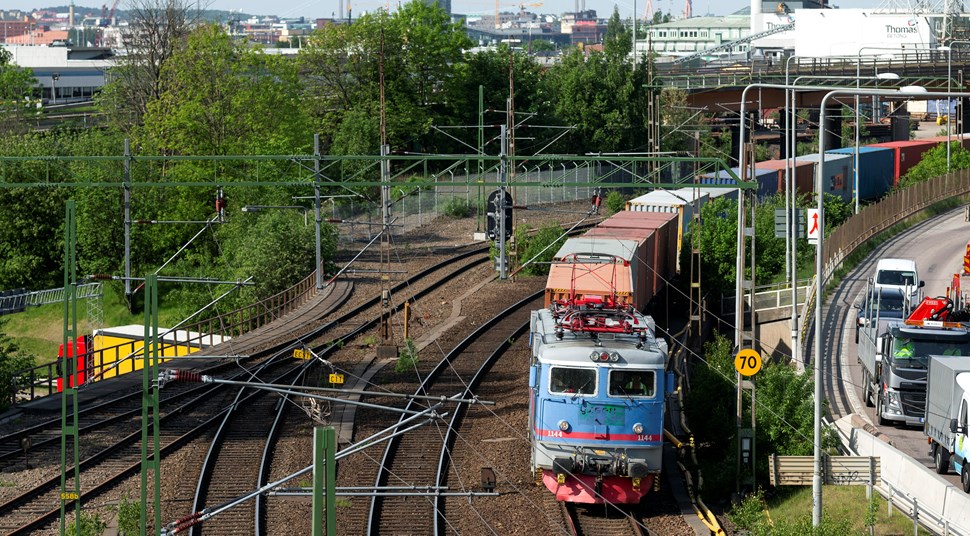 The Port of Gothenburg is one of few ports in the world where over half of container volumes are transported to or from the port by rail (59 per cent in 2018). Photo: Gothenburg Port Authority.

During the past year, rail-borne container volumes to and from the Port of Gothenburg rose by 13 per cent. Volume growth intensified during the year and was strongest during the final quarter with an increase of 27 per cent.

The increase can be compared with the downturn in volumes during the industrial dispute at the Container Terminal in 2017. Since then they have recovered steadily – short-distance road volumes initially, followed by long-distance rail volumes.

“Short-distance freight recovered very quickly whilst long-distance rail volumes took slightly longer. The fact that rail volumes are now returning at an increasing rate is a clear indication of the growing confidence in the Container Terminal throughout the country,” said Claes Sundmark, Vice President, Container, Ro-Ro and Rail at Gothenburg Port Authority.

High pressure at transloading terminals
Much of the long-distance freight is made up of Swedish basic industry products such as steel, paper and timber, which are generally transported by rail from inland locations or the east coast to the Port of Gothenburg for onward transport by sea to export markets on the continent.

The freight often needs to be switched to containers at one of the three transloading terminals at the Port of Gothenburg, all of which are located close to the Container Terminal. Transloading of sawn timber between rail and ship at the Port of Gothenburg is largely handled by the operator Mimab. Transloading of this nature rose by almost 20 per cent in 2018 compared with the previous year, and even at Mimab volumes were highest during the fourth quarter.

“We had an excellent year and a particularly good autumn, when we were working at full capacity. The trend has continued into 2019 with consistently high volumes. And there are no signs of a slow-down. On the contrary, the upturn looks set to continue,” said Michael Bergman, Mimab Chief Executive. 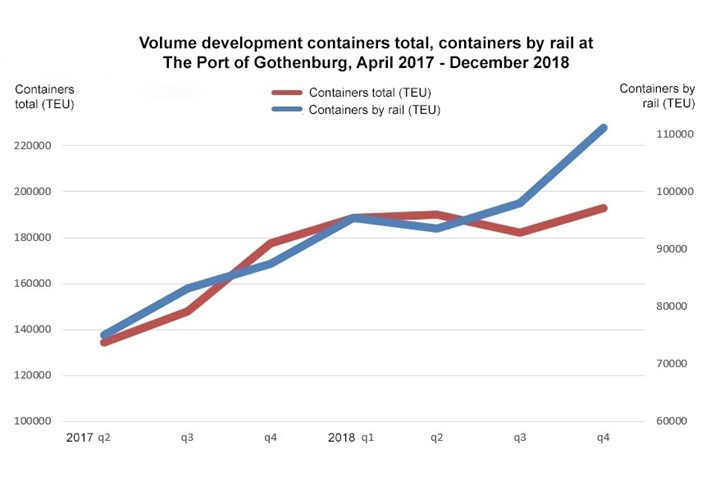 Container volume development at the port of Gothenburg since the second quarter of 2017. The proportion of rail-borne goods has increased substantially over the past six months. Image: Gothenburg Port Authority.

Double track Port Line improves reliability
The Port Line, the dedicated freight track that runs directly into the port, is being overhauled and converted into a double-track system. Several sections have already been completed, including the new double-track Marieholm Bridge, which opened back in 2016. Phase 2 was recently completed, bringing rail traffic all the way into the Container Terminal. Phase 3 of conversion of the Port Line to a double-track system is due to commence in 2019.

New Combi Terminal expands port rail offering
Just over a year ago, the Arken Combi Terminal at the Port of Gothenburg replaced the now defunct Combi Terminal in central Gothenburg. At Arken it is mainly road trailers that switch between rail, road and ro-ro vessel.

The move to a hypermodern terminal at a location close the port has resulted in more effective transport, increased volumes, and an overall rise in rail capacity at the Port. More than 60,000 units were handled at the Combi Terminal last year, which can be added to the almost 400,000 units that passed through the Container Terminal. 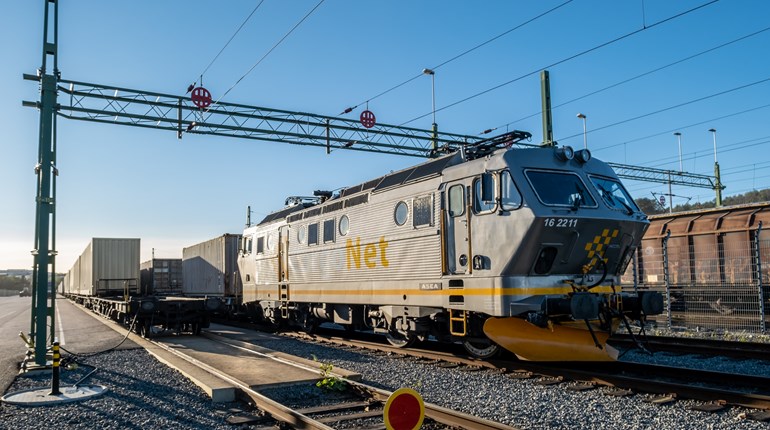 New rail link between Oslo and the Port of Gothenburg

Green light for a deeper fairway at the Port of Gothenburg