The purpose of the Green Bunkering concept is to ensure safe bunker operations and to protect the marine environment from oil spills.

The green bunkering project was initiated during 1998 after a fuel oil spill from a bunker barge in the archipelago of Gothenburg. The oil spill drifted to the island of Grötö and about 12 tons of oil was recovered and cleaned up.

The concept was developed in collaboration between Port of Gothenburg, the Swedish Coastguard, the Swedish Maritime Administration (The Swedish Transport Agency) and the regional bunker industry.

All bunker barges operating within the harbour, as well as outside the harbour limit in the anchorage areas, shall comply with the Green Bunkering requirements.

To verify compliance, annual inspections are carried out on the barges by authorised and independent inspectors. Random spot checks and inspections can also be performed by the Port Officers whilst the barge is alongside the quays in the Energy Port.

The operator for the barge needs to arrange for the inspection by contacting any of the available inspectors.

A prerequisite for attaining approval is that the barge has been vetted by an oil major according to the SIRE program by OCIMF. The requirements for the “Green Bunkering” concept apply to oil bunker barges, LNG bunker barges and slop-/sludge barges.

For allowing a bunker operation during SIMOPS, while the receiving vessel is loading/discharging a low flash point cargo, the deck equipment on the bunker barge must be ATEX approved when operating within the ATEX zone of the receiving vessel. In addition to the ATEX requirement, special operating procedures must also be followed. Prior approval of these operations, an ATEX inspection must be carried out on the barge. When the barge has been verified for compliance, a certificate with a validity of five years will be issued to the barge unless any modifications or changes have been made on the deck equipment.  For arranging an ATEX inspection, please contact Martin Svensson or Christoffer Lillhage.

In addition to the periodical inspections, crew training is also required by an e-learning course. The training requirement concerns crew members directly involved in the bunker operations. The e-learning course is provided by MAFLOBE. For registering a new training account, please contact MAFLOBE.

Link to course in green bunkering.

Handling of bunkering and sludge in the Energy Port

Bunkering may be delivered in all jetties in the Energy Port in accordance with the Bunker Safety Checklist with a few exceptions. The exceptions are:

- Jetty 551: No bunkering is allowed by a bunker barge with LOA greater than 90 m (vessels with LOA 90,5 are rounded down and are therefore allowed). Recommendations from the Port of Gothenburg are that bunker barges with LOA 60 m and less are to be used if possible. We also recommend that when bunker operations are performed on a vessel alongside jetty 551 that slow passage is requested from VTS Gothenburg.

LOA restriction for bunker barge applies due to shallow water area (8,5 m depth) east of jetty 551 but also due to the turbulence that arises when larger vessels pass the jetty.

- When bunkering of vessels handling products with low flashpoint (class 1-products), Part B2 of the Pre-Bunkering Checklist is to be followed and the bunker barge must have a valid certificate for allowing bunkering during low flashpoint.

LNG-bunkering is only allowed on jetties 510, 511, 519, 520, 521, 800 and 801 inside the Energy Port. The bunker barge must have presented an optimoor-study to the Port of Gothenburg for each specific jetty in order to be granted permission for the bunker operation.

Delivery of sludge is allowed on all jetties in the Energy Port.

Lightering (Ship to Ship) between two bunker barges are allowed on jetties 506-509 and/or 512-518 in the Energy Port. For permissions to perform lightering operations at anchor, the bunker barge must contact the Swedish Transport Agency.

Bunkering STS lightering checklist to be used, and when the operation is to be carried out at berth, sent to the harbour office, and confirmed by Port Officer before starting of lightering operation.

Due the condition of the jetty – no vessels are allowed to moor on the outside of another vessel (dubble-banking). Lightering or sludge disposal are only allowed between 556 B and 556 C or 556 A and 556 B. It is not allowed for the joints between two hoses to be placed on the jetty.

In addition, all bunker barges to report on ch13 to VTS according to passage plan reporting points. (applies for all jetties in the Port of Gothenburg)

In addition, all bunker barges to call VTS Gothenburg on VHF ch13 for vessels clearance before departure. (applies for all jetties in the Port of Gothenburg)

Reporting before bunkering operation at anchorage areas A, B, C

Regulations for mooring/unmooring of bunker barge

The bunker barge is not allowed to go alongside receiving vessel until the vessel is securely moored and safe access between ship and shore has been established. If the vessel is handling cargo with low flashpoint, se further details below.

Port Officer always have the authority to stop cargo operation during mooring of a bunker barge if it is necessary with regards to weather, wind and/or the size of the bunker barge in proportion to the receiving vessel.

Further restrictions apply for the jetties 520 and 521, see separate regulation.

Bunkering between two vessels is not permitted at an average wind speed of more than 20 m/s.

These checklists can be found on Port of Gothenburg’s official website
Permits and regulations (portofgothenburg.com)

LNG bunkering at berth is to be reported 24 hours prior to planned operation and sent via email to the terminal and the harbour office.

1 hour before the operation is the bunker barge shall report to the terminal and harbour office that bunkering is to be carried out.

Other than this, it is regulated which operation that may be performed within the different zones connected to the LNG bunker operation. Se below:

- Hazardous Zone: Is approximated within a 3 m radius from the bunker manifold (this is stipulated in the receiving vessels classification plan). In this zone only activity in direct contact with the LNG bunker operation is allowed.

- Safety Zone: 25 m radius from the bunker manifold. In this zone activities connected to cargo handling may be allowed. This includes connecting of hardarm/hoses, crane operating to lift reducers, hose etc. Other than this, no operations are permitted. For example, using the ships crane to handle stores and/or garbage is not allowed. There shall be a plan onboard the receiving vessel for these operations. See LNG checklist and SSSCL.

- Security Zone: Extended safety zone where the port and the receiving vessel have the possibility to control the activities carried out, for example traffic, other vessels and personnel/visitors.

Visual presentation of the zones 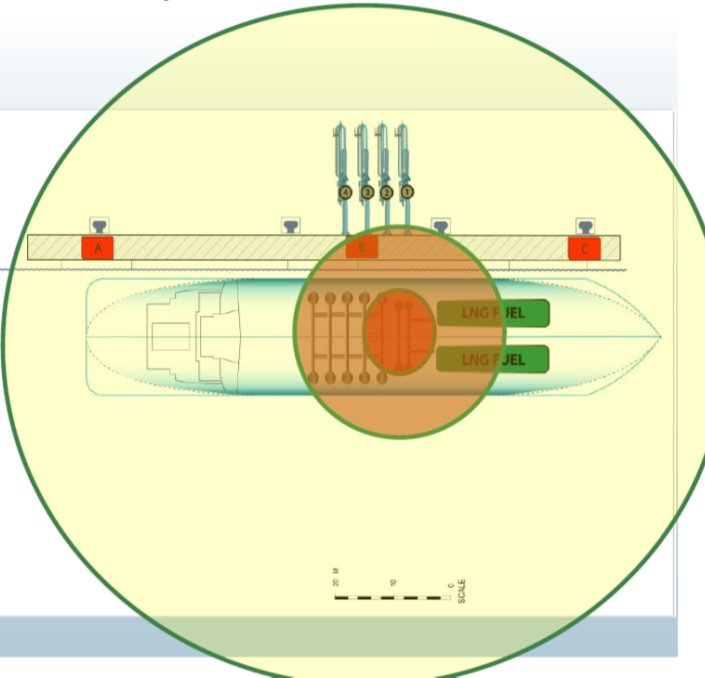