History of the port

The history of the Port of Gothenburg dates back to 1620. Which means we are celebrating 400 years this year! Here you can read about key events that have shaped the port and its development over the centuries.

17th century – It all began with Stora Hamnkanalen

The first harbour to be built in Gothenburg was on the Stora Hamnkanalen canal, which was dug out in the 1620s. However, it wasn't a port in the traditional sense. The water was so shallow that larger ships were forced to anchor offshore, beyond Klippan, or at Gamla Varvet (now Stigbergskajen). The goods were then transferred onto barges which transported them to Stora Hamnkanalen, to the storage yards in Majorna, or to quays further up the river. Exports comprised largely iron and timber.

It was well into the 18th century before trade with East Asia really gathered momentum. This was due largely to the Swedish East India Company (SOIC), which was founded in 1731. A Royal Charter granted the company certain privileges, including the right to all Swedish trade and shipping east of the Cape of Good Hope and a stipulation that all voyages should start and finish in Gothenburg.

The company imported a wide range of goods from China, the most important of which were tea, silk, porcelain, lacquerware and spices. Initially, trading proved successful and the company prospered although it gradually went into decline during the latter half of the 18th century. The company was finally closed down in 1813. 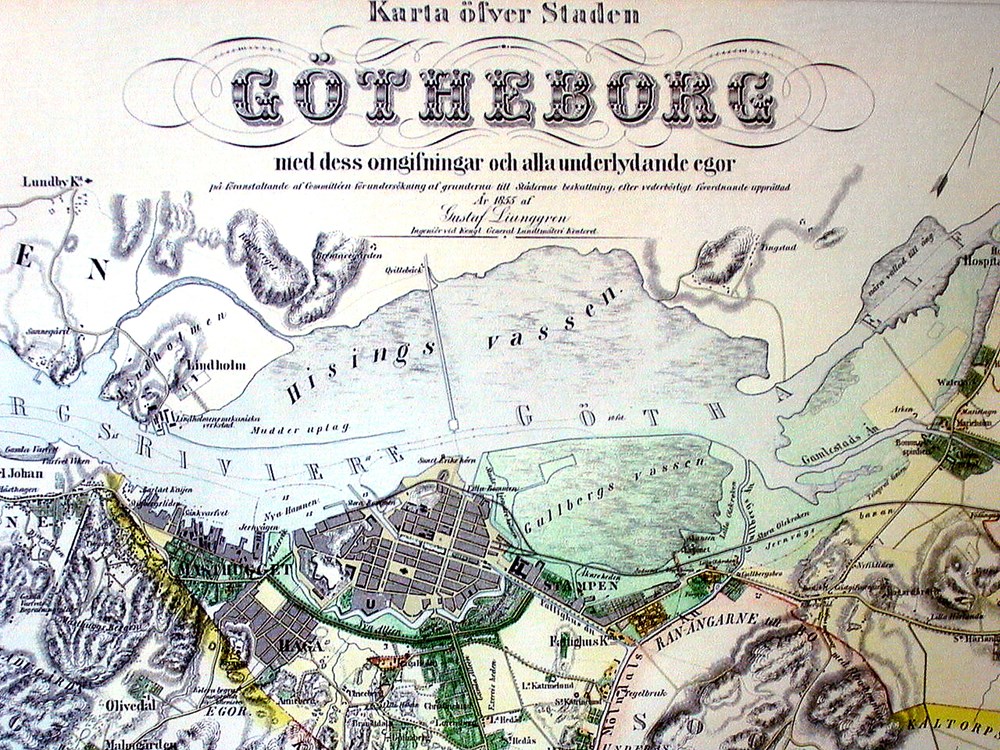 19th century – the Port of Gothenburg becomes a major port
In the middle of the 19th century, ships began to grow in size and thanks to steam power they could make their way up the Göta Älv river. This made it necessary to construct quays along the river. The first modern riverside quay was Stenpiren, which was completed in 1845. The engineering company Eriksbergs Mekaniska Verkstads AB was founded in 1850 and in 1871 it began building ships adjacent to its workshops.

Industrial age and the port
During the second half of the 19th century, Swedish export industry developed quickly, resulting in higher freight volumes at the port. Between 1888 and 1902, Masthuggskajen was built and was the first quay that could handle oceangoing vessels. The fairway was dredged to a depth of 7 metres and rail tracks were laid along the quays. The Port of Gothenburg was beginning to grow in importance.

The emigration era
The number of people emigrating increased at the beginning of the 1850s following the discovery of gold in California. From the end of the 1860s it was common to sail from Gothenburg to the USA via Hull in England. The flow of emigrants reached its peak in the 1880s, which led to a need for larger ships that could carry more passengers.

20th century untill now – Swedish America Line, world wars and bananas
The port needed to grow and this meant expanding across the river on Hisingen. Construction of Sannegårdshamnen began in 1908 and it was completed in 1914. For many years it was the central harbour for the import of coal and coke. After the end of the Second World War, the oil harbours took over as fuel harbours and Sannegårdshamnen became the main harbour for conventional freight to European destinations. The area is now owned by the City of Gothenburg and has been transformed into a popular residential area.

Eriksberg
The development of Eriksberg into a major shipyard began in 1915 when shipping company owner Dan Broström became the majority shareholder in the company.

During the 1950s and 1960s, Eriksberg was the most profitable shipyard in the country although by the end of the 1960s there was increasing competition from the Japanese shipyards. The situation worsened during the shipyard crisis of the 1970s and the Eriksberg shipyard was closed down in 1979.

As part of the redevelopment of Norra Älvstranden, Eriksberg has been transformed into a residential area. A large imposing crane still remains from the shipbuilding era and is a major landmark in the area.

The first ship bound for New York, the SS Stockholm, set sail in 1915. By that time the number of people emigrating had fallen – even if there was a final surge in emigration in 1923 – and the passengers were largely Swedes travelling to visit relatives in the USA. As conventional passenger traffic declined, the Swedish America Line changed direction to become one of the world's leading cruise companies with a very exclusive clientele.

The ships departed from Stigbergskajen and what is now known as Amerikaskjulet was built specifically for this purpose. The building is now the head office of the Gothenburg Port Authority and from 2018, the newly renovated America cruise terminal at Stigbergskajen ones again welcomes cruise ships to call at port.

100 years of bananas
Swedes are the biggest banana consumers in the world – approximately 20 kg per person per year – and for more than 100 years bananas were imported via the Port of Gothenburg. In March 1909, The Banana Company AB was founded and soon after changed its name to AB Banan-Kompaniet. Unfortunately, the first consignment arrived frozen and black and only a few bananas could be rescued and sold. Thanks to new, fresh consignments, interest in this exotic fruit grew and in 1930 annual sales reached 10,418 tonnes.

Over the years the banana boats came to symbolise the port and trade with other countries. Many of the people of Gothenburg have their own very personal memories of the banana boats when they berthed at the banana quay at Frihamnen and at the time they were a distinctive part of the urban landscape.

Bananas gradually began to be transported by container and handling was moved to the container port in 2000. The last banana boat arrived at the Port of Gothenburg in 2013, marking the end of a very special era.

Frihamnen
Frihamnen (Freeport) acquired its name as in the past it was possible to bring goods ashore 'free', which meant that it was not necessary to pay customs duty and VAT before the importer finally took the goods out through the gates.

Frihamnen was officially opened in 1922. Located on the Hisingen side of the river, immediately west of the northern abutment of the Göta Älv Bridge, it comprises three piers – Södra Frihamnspiren ('banana pier'), Norra Frihamnspiren and Kvillepiren.

The oldest parts of the harbour date from the 1920s although many sheds and warehouses are much newer. Bananas were unloaded there for many years and after that it was graced exclusively by cruise ships until 2017. Today, Älvstaden, a new residential district, is being built in this area.

Ryahamnen
Ryahamnen was built at the beginning of the 1930s, sowing the seeds of what is now the Energy Port. It was here that the major oil companies rapidly expanded their bulk storage facilities.

Lindholmen
Lindholmen is located between Sannegårdshamnen and Frihamnen and was the first area on Hisingen to be industrialised. Back in the mid-1850s, a shipyard was established to build ships made of steel and it expanded quickly with the addition of an engineering works dedicated to steam vessels.

At the end of the 1960s, the yard was beset by problems. Lindholmen made huge losses on a new type of ferry built to operate between Sweden and the UK. In 1971 the company was sold to Eriksbergs Mekaniska Verkstad, which subsequently moved many of its skilled workers to Eriksberg.

Lindholmen was also the site of Lindholmshamnen, which was completed in 1938. During the war years the harbour was converted into a large quayside warehouse and for almost 50 years it served as the harbour for ocean-going vessels carrying general cargo and cars.

In later years, Lindholmen has been transformed into a leading centre of science and education, focusing on digital communication. It is the site of Lindholmen Science Park and Gothenburg Film Studios.

The port during the Second World War
The war years brought both a rise and fall in flows at the Port in Gothenburg. Manufacturing companies and the shipyards were working flat out whilst conventional trade had declined.

The Port of Gothenburg was strategically important and in the light of the fact that it could potentially be used by the Germans, plans were put in place in spring 1944 to blow up the Göta Älv Bridge and by doing so block the entrance to the port.

During the war, Frihamnen was the scene of two prisoner exchanges, one on SS Drottningholm and the other on MS Gripsholm. Between 1942 and the end of the war the vessels were chartered by the US government and the Red Cross and served as exchange vessels for prisoners of war, diplomats and other civil internees. The vessels were granted safe passage and travelled across the oceans fully lit. 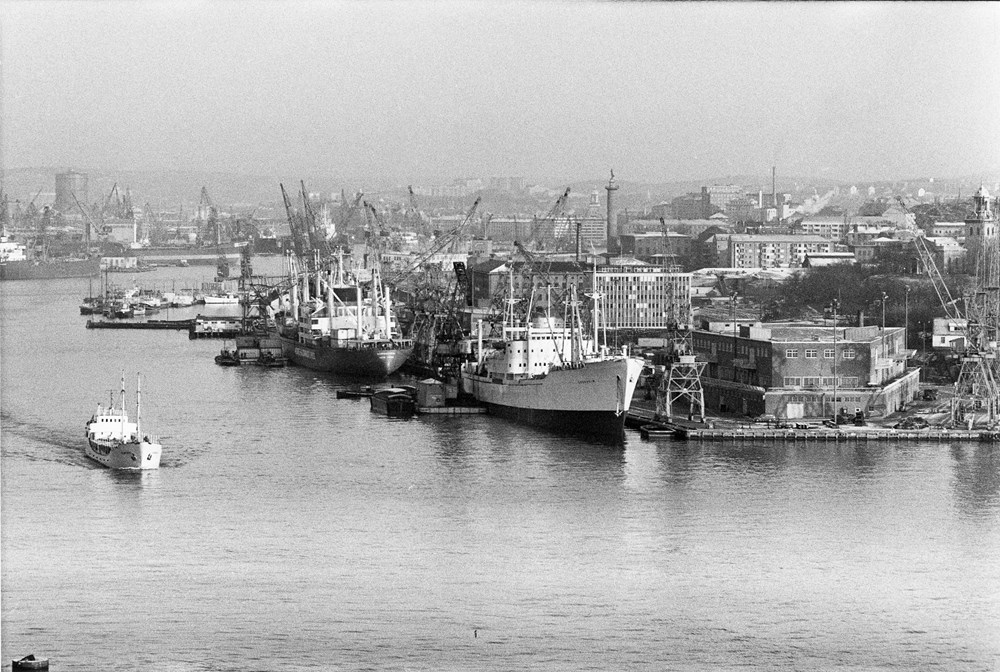 Lundbyhamnen
The post-war period at the Port of Gothenburg was characterised by further expansion on Hisingen. The first of the new port areas was Lundbyhamnen, which was officially opened in 1951. At the time it was a modern dry cargo harbour, complete with balconies on the storage sheds (allowing goods to be loaded directly onto the different floors) and large quayside areas for freight handling. The harbour was closed in 1989 and it has now been transformed into a residential area and a centre for education, high-tech enterprises and conferences.

The maritime heritage still lives on in the form of the Chalmers University of Technology Department of Shipping and Maritime Technology.

New oil ports
When the import of crude oil increased, capacity at Ryahamnen was no longer sufficient. At the beginning of the 1950s construction of a new oil harbour began – Skarvikshamnen. Completed in 1957, it originally had two berths. A third berth was added in 1965.

Two years later, Torshamnen was completed, extending the Port of Gothenburg even further west. Located at Hjärtholmen, in the Rivö Fjord just beyond the entrance to the port, it could from the very outset receive vessels up to 90,000 tonnes.

Skandia Harbour
The Swedish economy was operating at full speed in the decades after the end of the Second World War. Exports and imports increased and on the shipping side the vessels became bigger and containers made their entrance as a load carrier. This required new, larger quays at the Port of Gothenburg and a new terminal, Skandiaterminalen, was opened in 1966. It was a large container terminal with powerful cranes and paved areas that were necessary for the straddle carriers to operate. It was created by enclosing and filling in 1,300,000 square metres of the Älvsborg Fjord. Skandia Harbour had been planned for a long time and was adapted at the last minute for container traffic.

Today container traffic dominates entirely and Skandia Harbour is the largest of its kind in Scandinavia, with around 60 per cent of the Swedish container market. There are also large-scale imports and exports of cars.

Älvsborg Harbour
The next major expansion phase at the Port of Gothenburg was in the 1970s. Located immediately west of the container terminal, Älvsborg Harbour began operating in 1978. As it was built exclusively for ro-ro traffic, there were no cranes and all the freight was driven or towed on board. Paper, steel and cars are the main export products at Älvsborg Harbour.

Feel free to download images for publication from our gallery but make sure to mention Port of Gothenburg as source.